Happy Memorial Day and remember to remember those that have paid the ultimate price for our great nation this holiday weekend. The #Capitals are in #Vegas to face the #GoldenKnights and Joe is joined by Aaron Crouch, host of the Vegas Squares Podcast (@vegassquares) to breakdown the SCF matchup and discuss what may be a storybook ending for one of these two teams that both kinda feel destined to win the Cup of Lord Stanley Preston. This is it DC, we are just one “sleep” away from game one! Listen and learn everything you need to know before history is written on Monday night!

Hard to imagine that this little sports experiment is 100 episodes and 52 articles old but here we are. Many have asked “Why didn’t DTC celebrate their 100th episode?” and there are two reasons… the first is embarrassing but true, we lost track of what episode we were on and this isn’t a sitcom, so does it really matter? The second reason is the real reason… we don’t want to jinx (fake jinx) the DC Sports Curse… which may or may not be real… but could be… but we aren’t sure… but we’ll see.

The entire city will be watching tonight, we are lead to believe so at least, as the Capitals attempt to win a game seven… on the road… and lead a DC team to the the finals in one of the four major sports for the first time in 20 years. The premise of this entire project, podcast, articles, and all, was to find some mojo to defeat the sports curse which has crushed souls and spirits in the District spanning nearly an the age of an adult of drinking age. The image above is so perfect and is borrowed with love from RussianNeverBreaks and is so perfect D.C. wouldn’t you agree… the crying Jordan meme is all of us for the past two decades but win or lose tonight, the Capitals are to be received with nothing but praise.

If you are anywhere near D.C. tonight, or maybe attending the Nationals game this afternoon, make your way over to the Cap1Vault and watch the Capitals vs. Lightning LIVE with the DTC sports crew and join us for a live show afterwards… win or lose we will broadcast… but we want a win! We want June hockey in DC as bad as we want November baseball and maybe, one day, February football too.

If you have no idea what I am talking about or have recently arrived from outer space, get caught up on all things Caps by listening to and subscribing to our podcast. Off the bat of Mark Reynolds… the Nationals win all four in Arizona, improve to 13 wins in their last 15 games, and are outscoring opponents nearly two to one (69-35). The Nationals are rising, the pitching is outstanding, and the panic that was has no subsided to a gentle “May-Calmness” that everyone DC can appreciate! The Capitals seem to be on a heater of their own but what the Nationals are doing day in and day out is excellent and most on the panel today agree they could go 8-2 or 9-1 over their next ten to further pad their stats! Join Stevie, Reali, Mat the Met, Doc, and Joe on a full-house roundtable discussing all things Nationals! .. and go C-A-P-S CAPS CAPS CAPS!

“It’s human nature to miss what’s under your nose… Till you remind a fool”
~Fresh Eyes, Andy Grammar

My apologies on the cheesy opening line but anytime you can incorporate an Andy Grammar lyric into a baseball article, you gotta go for it. Next week hopefully will be a Kanye reference (just kidding, but we do love free thought).

The truth is just as the lyric says, sometimes all of us take for granted something so close to us, something so great that we see so often. And that’s exactly where a lot of Nats fans might be right now with one, Maxwell M. Scherzer.

Every 5th day this guy gets on the bump is a sight to behold. The buzz in the stadium when Max is pitching is electric and the anticipation of seeing something special is palpable. And the numbers back it up. 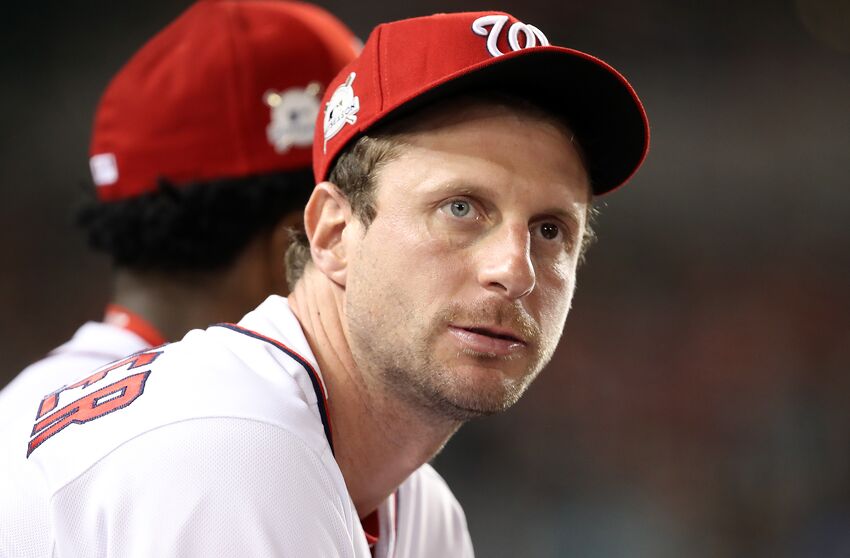 In the month of April, Scherzer went a sterling 5-1 with a 1.62 ERA (7 ER/39.0 IP) and 57 strikeouts against just nine walks. Those numbers were good enough to earn him the National League Pitcher of the Month Award, announced last Wednesday.

In three starts from April 9 through April 20, Scherzer allowed just seven hits in 71 at-bats, yielding an opponent slash line of .099/.169/.183. He struck out 30 batters and issued just four walks during this stretch of games. On April 9 against Atlanta, he tossed his ninth career complete game (fifth career shutout) to end Washington’s five-game losing streak. On April 14, he struck out 11 batters in 7.0 innings of two-run ball as the Nationals topped the Colorado Rockies, snapping the club’s three-game losing streak.

With the Nats off to a somewhat rocky start, one shutters to think where this team would be without the consistent brilliance of Scherzer. But as we at DTC have been saying all season long, as long as Max is there every 5th day, this ball club will be in the hunt come October.

But speaking of October, I think I speak for all Nats fans when I say as great as Max has been, there is a still a long way to go to make up for that disastrous relief appearance against the Cubs in Game 5 of the NLDS last year. The thought of handing the best pitcher in the world a lead in a decisive game 5 at home in the top of the 5th and not winning that game still conjures up nightmares among those who were unlucky enough to witness it at the ballpark. But that was then, and this is now fresh season, fresh hopes, fresh dreams, fresh dominance, fresh eyes.

And speaking of all things fresh, Let’s go Caps! #ALLCAPS