*side note; Marcus Peters should be immediately suspended by the NFL for sitting in protest during the National Anthem on Monday Night a day after the deadliest shooting in America took place in Las Vegas. What exactly are protesting you idiot? The police saved lives by running into harms way in Vegas, and Peters can’t be bothered to stand or at least kneel? The NFL is finished if they don’t stop this nonsense from continuing. Shame on YOU Marcus Peters, you sir, are a disgrace.
Now, the Redskins…
The Redskins fell to the Chiefs at Arrowhead on Monday Night Football but several Redskins fans found themselves asking a confusing question… what is a catch? The NFL for several years now has struggled to explain why a runner crossing the end zone line with the ball is deemed “in” for a touchdown regardless of what happens the split second after while a receiver who catches a ball and lands inbounds isn’t afford the same courtesy.
Last night, on a 3rd and 2 late in the game the Redskins opted to take a shot at the end zone. Josh Doctson ran an excellent route, turned to find the ball, caught it with two hands, twisted, landed, but was considered to not have completed the catch. But he caught it, with two hands, tucked it, had a knee and arm down BEFORE the ball came out? Doesn’t matter. The NFL has no idea why it isn’t a catch except for the refs say so. If the refs had called it a catch it probably wouldn’t have been overturned on account that the ground can’t cause a fumble, but in the end, the refs said no-catch, and that was it. Game decided by a referee enforcing a subjective rule that nobody understands. 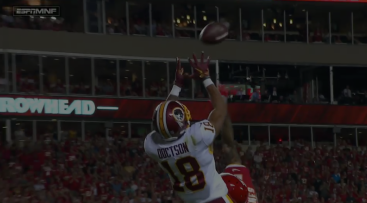 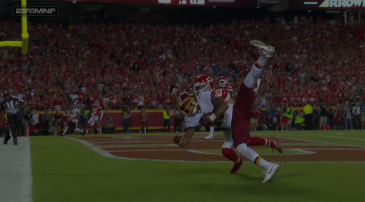 Ultimately, the Redskins lost this game for more reasons than one, and for not making more plays than just this one. The defense couldn’t get off the field in the second half and eventually fatigue set in and the Chiefs were able to run effectively. The Redskins dominated the first 25 minutes of the game but were dominated and beat soundly the rest of the way.
The Redskins are clearly missing the production lost from offensive players that have moved on to different teams but this core group can still play and score and run an effective game plan as installed by the coaches. The defense played extremely well until the final frame but suffered at least six injuries including Josh Norman with a fractured rib. If Norman misses extended time, the secondary will struggle without an extra body to help out which means one less body to rush the opposing QB’s.
Most Redskins fans would have accepted an offer to guarantee the Skins would be 2-2 headed in to their bye week and that is exactly where the team is now. Before the season started several of us here at DTC and in DC feared this team wouldn’t be able to compete and would end up winning five games or less… today, after a tough loss, the playoffs are definitely within reach and the Redskins have proven they have the defense to slow down any offense and they will be in the mix to win EVERY game this season without exception. Be encouraged ‘skins fans!
Hail to the Redskins!